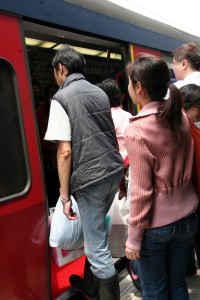 Residents of Melbourne are using public transportation more than ever. This includes a 13.2 percent rise in the use of trams, buses and trains just last year.

Leading the way were trams, which experienced the highest passenger growth rate. Passengers using trams were up 15 percent to 178 million trips annually. The patronage figures from March also show an increase of 14 percent in bus usage and 11 percent to 214 million trips of train usage.

Lynne Kosky, Public Transport Minister, commented that the bus network now services more than 100 million passengers on an annual basis. This is the highest number of passengers since the 1970s.

Ms. Kosky was quoted as saying “More people than ever before are using Melbourne’s public transport network and that is why we have projects worth $1 billion already just completed or underway plus more than $6 billion funded through the State and Federal budgets.”

She also added the increase in passengers using the bus reflects the $1 billion investment by the government to enhance the local bus services.

“The massive investment has also created more than 400 full time jobs and provided a boost for the bus industry creating more opportunities for local suppliers and businesses,” she added.

These statistics arrived only one a week following the revelation by Connex that 53 new train services will be added to selected lines beginning in July. In addition, Werribee line services were increased with trains running every 10 minutes throughout the day. Frankston, Williamston and Pakenham lines will also notice improved services.

According to Ms. Kosky, even more enhancements will be made to the public transport network of Melbourne. These include 50 brand new low floor trams, more track works and more buses on the Dandenong, Werribee and Craigieburn lines.

Terry Mulder spoke against the public transport system through his comment that the “weekday squeeze” now lasted longer on a lot of the Melbourne train lines.

He stated that “Minister Kosky accepts a figure of 5000 trains being delayed 6 minutes or more every month as ‘normal.’ Between 15 and 20 per cent of trains on the Cranbourne, Frankston and Pakenham lines run at least six minutes late most months. The number of tardy trains is worst during weekday peak hours.”

Mr. Mulder added that both Ms. Kosky and Premier John Brumby were aware that significantly more people began to use the trains in Melbourne during 2004.

“Tired and stressed train passengers are paying more, getting less and going slower,” he declared. “John Brumby and Lynne Kosky’s obsession with the bungled myki smartcard tickets has led to a cost blowout of at least $856 million. This blowout could have purchased about 25 new six-carriage trains including maintenance contracts. Instead Labor has poured it down the myki monster’s bottomless money pit while pensioners get overcharged when they use myki on buses in places like Ballarat, Bendigo and Geelong.”

Clearly there are differing views on this topic. Which side is right and which one is wrong will only become apparent with time.